Regalia of the Scottish Rite

REGALIA AND DEGREES OF THE SCOTTISH RITE

The Scottish Rite cap is a vestige of the dress regalia more commonly associated with orders of European knighthood. Aside from their distinctive caps, the full-dress regalia of the various orders includes other accouterments such as sashes or cordons, swords and sword belts, cloaks or capes, and jewels, badges, and other decorations denoting their rank or office within their respective orders.

The two separate traditions of the stonemason’s craft and medieval knighthood have become so intimately intertwined in the rich pageantry of our Masonic ritual and regalia that most Masons never stop to consider how or when the two became woven together.

Today, most Masonic historians look to the mid-1700s for the introduction of the chivalric tradition in Freemasonry. Masonic rituals published prior to that are concerned purely with the legends and implements of the operative Mason. But, beginning in the mid-1740s, additional Degrees appeared that conferred orders of knighthood upon enthusiastic Brethren eager to add to and to embroider, if you will, their Masonic experience.

The seminal moment seems to be an oration delivered to a French Lodge on December 26, 1736, by the Chevalier Michael Andrew Ramsay, a Scotsman serving as the Grand Orator of the Grand Lodge of France. This Masonic lecture, known to history as “Ramsay’s Oration,” embellished upon existing traditions by stating that the founders of Freemasonry were Crusader knights who, in emulation of the ancient Israelites, handled “the trowel and mortar with one hand,” while in the other, “they held the sword and buckler.”

The subsequent wide publication of this stirring lecture met with such great approval on the part of the French Brethren that, over the next few decades, a number of chivalric Degrees appeared. Whether these Degrees were created out of whole cloth, or were developed out of older, existing orders, legends, and oral traditions has been grist for Masonic historians since the first appearance of these so-called Hauts Grades, or High Degrees. Nevertheless, the introduction of the chivalric Degrees into the structure of Freemasonry led to the formation of Scottish Rite Freemasonry where the two traditions, of working craftsmen and religious knights, would be forever mingled.

In what many consider the most moving and impressive Degree of the Ancient and Accepted Scottish Rite, indeed, perhaps the culmination of the Rite, the Degree of Knight Kadosh (30th Degree), the Candidate presents himself as an aspirant to be admitted into “the Knights of the Poor Fellow Soldiery of the Temple of Solomon,” the ancient name of the Knights Templar.
The new Scottish Rite Mason may at first be confused by the several different colored caps he will encounter at the first few meetings he attends. The following is a listing of the various versions of the Scottish Rite cap.

The black silk cap, adorned with the recognizable Scottish Rite double-headed eagle, is the cap of a Master of the Royal Secret of the 32nd Degree.

The blue cap, decorated in front with a gold number 50 surrounded by a wreath is the cap of a Fifty-Year Scottish Rite Mason.

The red cap, emblazoned with the red and gold cross of a Knight Commander, designates that the wearer is a 32nd Degree Mason who has been invested with the “rank and decoration” of Knight Commander of the Court of Honour, usually abbreviated K.C.C.H..

A white silk cap surrounded by a band of dark blue velvet bordered in gold is the cap of the Grand Cross of the Court of Honour. The front of the cap is adorned with the gold Teutonic cross of the Grand Cross. This honor, like that of Knight Commander, is awarded at the Biennial Sessions of the Supreme Council.

A white 33rd Degree cap that is surrounded by a band of red velvet bordered in gold is the cap of a Deputy of the Supreme Council. It indicates that the wearer has been deputized by the Supreme Council to govern the operation of the Rite in his Orient (state or territory).

The purple cap is that of a Sovereign Grand Inspector General, or S.G.I.G. It is surrounded by a band of purple velvet, bordered in gold and decorated with a gold vine of laurel leaves and berries. The front of the cap is emblazoned with a purple and gold Patriarchal Cross with crosslets. The wearer of this cap is the head of the Rite in his Orient and is an Active Member of the Supreme Council.

The violet cap is reserved for the Sovereign Grand Commander. It is surrounded by a band of violet velvet and, like the purple cap, is also decorated with a gold vine of laurel leaves and berries. The front of this cap is emblazoned with the Salem Cross with crosslets.

In addition to their caps, Scottish Rite Masons are distinguished by their colorful regalia and jewels, which can be seen at almost any meeting. Some of the symbolic meanings of the regalia are well-known, and others are shrouded in the mists of speculation (which makes Masonic research so much fun).

Central to the ritual of the 14°, Perfect Elu, is the presentation of a ring, worn by Scottish Rite Masons from the 14° through the 32°. It is a plain gold band with an equilateral triangular plate enclosing the Hebrew letter yud, the initial letter of Yahweh—the tetragrammaton—the ineffable name of God. Engraved on the inside is the Latin motto, “Virtus Junxit Mors Non Separabit” (Whom virtue unites, death will not separate). Ill. Bro. Jim Tresner, 33°, G.C., tells us in Vested in Glory, “The circular shape of the ring symbolizes unending commitment and loyalty, just as it does in a marriage. The triangular plate and the letter signify that the commitment is to the Deity.”

A Thirty-Second Degree Mason, Master of the Royal Secret, is identified with the jewel of the Degree: a gold Teutonic Cross with the numerals XXXII surrounded by a laurel wreath in the center and suspended from a white ribbon. The Teutonic Cross was probably adopted because the Grand Constitutions of 1786 were believed to be authored by the Prussian King, Frederick the Great, and the Teutonic Knights were the preeminent German order of knighthood. The laurel wreath is the ancient symbol of victory and triumph, and it is used throughout Scottish Rite Regalia. Here it can signify the triumph of attaining the Royal Secret. 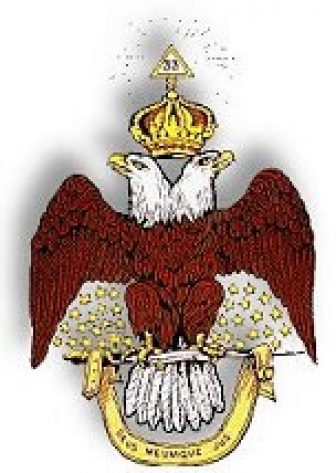 After being a Thirty-Second Degree Mason in the Southern Jurisdiction for at least 46 months and distinguishing himself in service to Masonry, to the Scottish Rite, or to the service of humanity, a Brother may be selected to be invested with the Rank and Decoration of a Knight Commander of the Court of Honour. The selection is made by the Supreme Council at its Biennial Session meeting every odd year, and about 2.5% of our members have been so recognized. Recipients of this honor receive a special jewel to wear on their coats, over the heart. The K.C.C.H. jewel is a red passion cross (arms of unequal length), fitched (the ends terminate in three points) on a circle of laurel leaves, on which is a raised gold circular plate, with gold beads around the circumference. The plate is enameled in white, and on it is a green trefoil, an ancient symbol of spirituality. Around the trefoil is “KT. COMM. COURT OF HONOUR.” The jewel is suspended from a white ribbon.
Possibly the most recognized (and certainly misunderstood) Masonic honor is the Thirty-Third Degree of the Scottish Rite. In the Southern Jurisdiction, one who has been a Knight Commander of the Court of Honour for at least 46 months is eligible to be elected by the Supreme Council to this Degree. About 1.5% of our members hold this Degree. The ring is a triple band of gold, either plain or with a triangular plate of gold enclosing the numerals 33. The jewel, suspended from a white ribbon, has very distinctive details.

Jim Tresner describes it as follows: “The basis of the jewel is a Teutonic Cross. On that is a nine-pointed star, composed of three gold triangles, interlaced. The design also forms nine small triangles, and in each of these is one of the letters … ‘S.A.P.I.E.N.T.I.A.,’ the Latin word for wisdom. A sword extends from the lower part of the left side of the jewel to the upper part of the right side. Crossing that is … a ‘Hand of Justice.’ This forms a scepter, terminating in a carving of a hand…. On top of the cross, triangles, crossed sword, and Hand of Justice is a circular plate, and on the plate is a shield with a crowned double-headed eagle. To the right of the eagle is a balance and to the left is a Square and Compasses. Around the design are the Latin words Ordo ab Chao, Order out of Chaos, enclosed by two serpents, each biting its tail.”

The Teutonic Cross continues to remind us of the German origins of the Grand Constitutions of 1786. The double-headed eagle looking to the East and West may be from the coat of arms of Germany or from a French ancestor organization of the Scottish Rite, the Emperors of the East and West. Its crown signifies that the Thirty-third Degree is the administrative Degree of the Rite, and this symbolism of proper administration is continued with the sword of strength, the hand of justice, and the scales in balance. The three three-sided figures remind us of 33, the number of this Degree, while Sapientia indicates the symbolic achievement required for this recognition. The snakes biting their tails are ancient symbols of eternity and completion, and can allude to the scriptural admonition, “Be ye therefore wise as serpents and harmless as doves” (Matthew 10:16).

The highest honor awarded by the Supreme Council, 33°, S.J., is the Grand Cross of the Court of Honour. There are fewer than 60 living recipients of this decoration out of nearly 400,000 members in the Southern Jurisdiction. The Grand Cross jewel has as its foundation the Teutonic Cross of the 32° and 33° resting on a wreath of gold oak leaves, emblematic of strength of purpose in the service of humanity and the Rite. In the center is a gold circular plate with a blue enameled border containing the gold letters, “GR. CROSS COURT OF HONOUR.” In the center of the plate is an enameled crimson rose with green leaves on a white background. The red rose recalls the imagery of the 18°, Knight Rose Croix, where the flower represents renewal, as a recipient of the Grand Cross is forever renewing his efforts to serve.

All of the unique regalia of the Scottish Rite is explained in detail with color pictures in Bro. Jim Tresner’s book, Vested in Glory.

8° Intendant of the Building

17° Knight of the East and West

20° Master of the Symbolic Lodge

23° Chief of the Tabernacle

24° Prince of the Tabernacle

25° Knight of the Brazen Serpent

27° Commander of the Temple

The Consistory confers the 31st and 32nd Degrees. The presiding officer is the Master of Kadosh.

32° Master of the Royal Secret